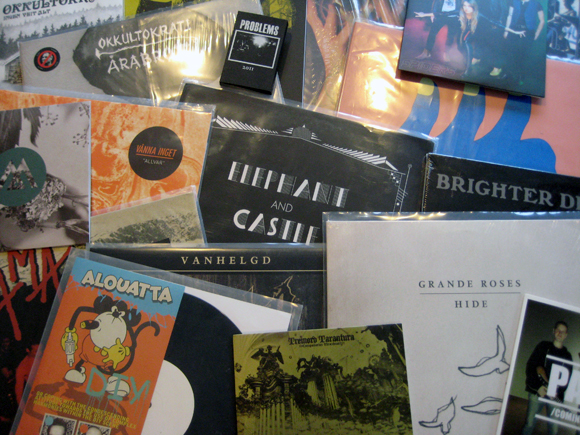 The prospect of whittling down my list of 2011 favorites to a standard top 10 or even 20 just didn't seem quite so appropriate this year so I've opted instead to break up my selections into a few compartmentalized and highly subjective niches. When I reflect back on the year just passed, this is the method that makes the most sense to me, and besides, music is not a contest and many of these records simply cannot withstand side-by-side scrutiny. Hopefully you'll agree, but if not, there's always the comments section.

For lack of a better signifier, here are a few of my favorite releases that don't fit neatly into a clever subgenre.

Peter Bjorn and John - Gimme some
I feel bad for everyone who can't move beyond "Young folks". PB&J has always been and continues to be a fantastic powerpop band and their latest album might just be their best.

Penny Century - Friends and family
A grower, not a shower. I found myself returning to this record time and time again, discovering new things to appreciate almost every time. A deeply nuanced work masquerading as sweet indiepop.

Cut City - Where's the harm in dreams disarmed?
A fitting swan song that their final release should be a perfect encapsulation of modern goth/pop/postpunk.

Kaka - The two
Brilliant, addictive and secretly subversive once you start digging into the lyrics.

Excellence in consistency, consisently excellent. While no one release blew me away quite like Okkultokrati's "No light for mass" or Haust's debut LP "Ride the relapse", the Oslo horde has been regularly churning out some of the finest punk/metal/hardcore in the world today.

Allow me to step outside my confort zone a moment to also recommend to you the not-exactly jazz labels and , based in Norway and Sweden respectively. Both are delivering an amazing array of excellent genre-breaking music and, while I may not be intimately familiar with the circles they travel in, I can confidently say that almost every single release they've put out is well worth investigating.

Matti Bye & Mattias Olsson - Elephant and castle
Wheezing vintage organs and the clatter of clever percussion combine to create one of the most satisfying and creepy albums of the year.

Execration - Odes of the occult
Much in the same way that Obliteration's "Nekropsalms" stood head and shoulders above the rest back in 2009, Execration's "Odes of the occult" expands on the same template established by their countrymates and adds a hefty does of epic doom to their filthy death metal, thus easily enabling them to (ahem) obliterate the competition.

2011 was an amazing year for EPs and many of these titles I have listed make up my absolute favorite releases of the year.

Grande Roses - Hide
Hands down, the best rock record of the year. Vital and passionate in an era when so many feign indifference or hide behind irony, no one else comes close.

Kite - IV
Even if you think that they'll never write another song as good as "Ways to dance", or even if you think they already did, Kite has never had a 100% fully satisfying release until this. Five songs, all synthpop anthems.

The Psyke Project - Ebola
As said before, forget the other half of this split -- it doesn't exist as far as I'm concerned. The Psyke Project is brutality personified; every time you think they couldn't get any heavier, they do.

In These Woods - s/t
Technically a late 2010 release, but who is really paying attention to anything new in late December? Classic Swedish indie guitar-rock is saved from extinction yet again.

Alouatta - DIY
Melodic mid-tempo punk played by dudes who are old enough to know better, but also old enough to do it just right.

Not appropriate to waste words on these here, in this forum, but these records are all excellent and well worth checking out:
Austra - Feel it break
Charles Bradley - No time for dreaming
The Devil's Blood - The thousandfold epicentre
Royal Headache - s/t