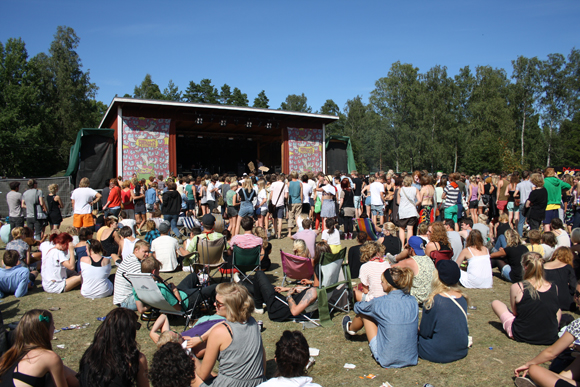 The 2009 Emmaboda Festival is bigger than ever, more bands, more spectators, more camp sites. It offers a broader selection of music than ever and it is one of few Swedish festivals with a positive growth rate. Yet it is still the smallest and coziest festival I have been to. The festival that used to be all about indiepop is nowadays all about variation and this years program contains everything from electropop to Springsteen influenced rock and ultra-commercial metal. Major foreign artists include 2 Many Djs, The Wombats, Metronony and The Pains of Being Pure at Heart, among others, but I will keep my focus on the Swedish bands.

The site of the festival is the small town of Emmaboda; a sleepy industrial city in the middle of the Småland forests in south-eastern Sweden that is brutally awakened by thousands of partying, concert-going teens and twenty-somethings once a year. The festival area itself consists of one big forest-covered field that contains everything: stages, camping, bars, food facilities and port-a-potties. This also means that you can camp more or less right next to a stage and, if you wish, bring your own drinks to concerts. 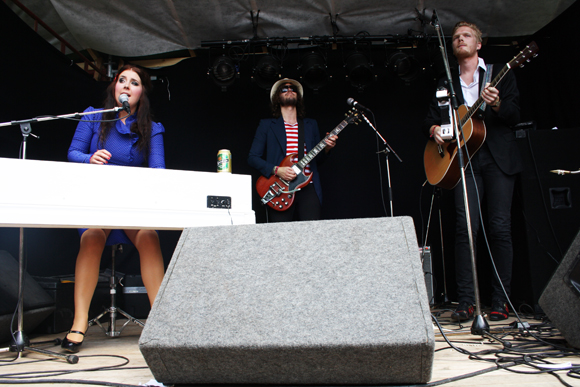 The first thing I do as I enter the festival area is to hurry over to the forest stage where Stockholm pop sensation Jonathan Johansson is performing. He is telling anecdotes from the cool elitist nightclubs of the Swedish capital and plays drum machine powered pop, reminiscent of early Swedish 90's pop. If the Smashing Pumpkins had formed in a Swedish suburb instead of Chicago, it would have sounded like this. However, it is a little too slow to wake up the sleepy audience and it is only the finishing Bruce Springsteen cover "Dancing in the dark" that really stand out.

Next up is Skansros, a Göteborg-based pop ensemble with a Håkan Hellström hangup. Their set includes everything from funky pop pieces to a little too pretentious out-of-tune ballads, but most of it is just plain excellent pop music.

Dead By April, Sweden's hottest commercial metal act and this year's least expected booking at the festival take their time to sound check and enter the stage a good half hour after set time. Their music combines growling and delicate singing with sweet melodies and heavy riffs. Their act of trying to look hard and sensitive at the same time fails miserably, and they end up looking like Sweden's version of Crazy Town or Evanescence.

Thursday's headliner are Skåne's legendary Bob Hund. They perform a super tight set as always. Top-notch both when it comes to song selection (a good mix of new songs and old hits like "Hörlurar" and "Min lilla planet") and crazy antiques from singer Thomas Öberg, today wearing a black mask instead of the usual white one. A perfect synthesis between madness, genious and rock music.

Detektivbyrån start off playing their harpsichord-powered folk pop just after dusk and perform a beautiful, almost meditative set. However, their attempt to make us listen closer by playing at a lower volume fails totally, plenty of times throughout the set their songs are overpowered by a screaming audience. But that is all forgotten when they finish the concert with two covers: "Lambada" and Klaus Wunderlich's classic "Popcorn". Pure genius. 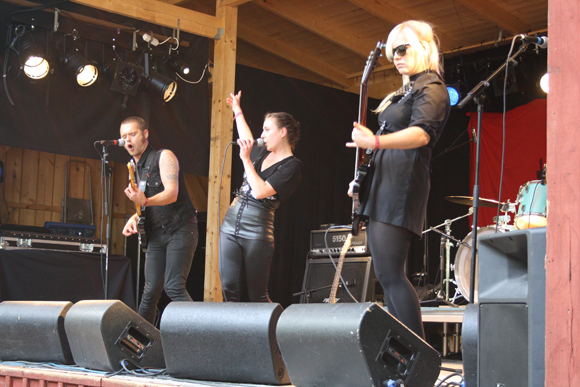 Friday starts off with a mild breeze, blue skies and a cozy breakfast gig by Miss Li. Her naive, yet clever songs and piano hammering is a perfect combination and makes the audience forget their hangovers right away. It is a charming and relaxed show, at times perhaps a bit too relaxed when she repeatedly forgets lyrics and talks at length with her band mates about Ulf Lundell.

A few hours later Joel Alme gives us a solid rock show from the forest stage. There are strings, brass, warm melodies and heartfelt lyrics that never becomes too pompous or pretentious. Plenty of new songs show there is still a lot more to come and modern classics like "Always on my mind" and "Queens corner" draw down massive cheers. Perfect pop hits from the Swedish West Coast. Joel is Emmaboda's own Bruce Springsteen.

I have never seen The Baboon Show perform their chaos rock live before. Today's great show is sadly wasted on way too sparse an audience but frontwoman Cecilia Boström is never the less all over the stage from the second the band enters. Hits like "Faster faster harder harder" stick out in a set that is exemplary short. Like The Hives with a female lead singer.

Florence Valentin's performance on the Meadow stage proves that they have grown into a tight live music machine. The show kicks off with the bands most recent single "Spring Ricco" and from then on it is a full-frontal, left-wing pop attack. Lead singer and agitator Love Antell is cocky as ever, one second he talks about bringing down the government and the next he dedicates "Uppå sociala", a song about spending your welfare money on alcohol, to all the recent high school graduates in the audience. If you can stand the super obvious Clash influences, this is a really great show.

Legendary raw punks Moderat Likvidation made their first gig since the 80's last year and have been touring off and on since then. At Emmaboda they mix classic songs like "Köttahuve" with new ones from their most recent album "Mammutation". It is punk with d-beat, death and hardcore vibes. The old songs has the crusties moshing and the audience cheering and singing along while the new songs mostly leave people waiting for another oldie... But it is, all in all, a very good performance, appreciated both by the punk-dads and the new generation punks in the audience.

Laakso singer Markus Krunegård has had a massive success with his solo career. If it is the timely release of the vampire themed single "Jag är en vampyr" or just the winning concept of great pop melodies, I don't know, but when he enters the Meadow stage one thing is clear: he is a superstar. There is a huge audience, teenage girls scream at the top of their lungs and sing along to every song. The show is remarkably average though, it lacks structure (perhaps due to things repeatedly being thrown onto the stage) and is not very engaging if you're not already a big fan. 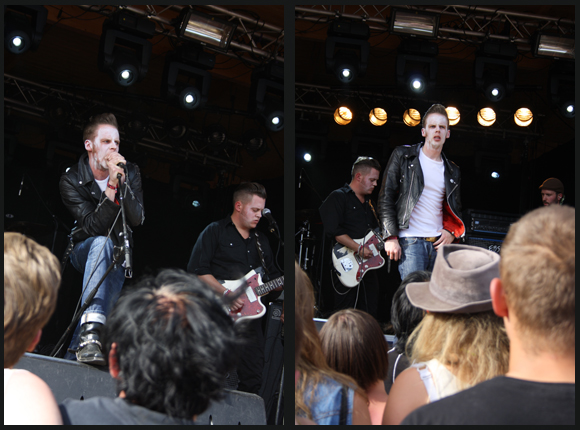 Saturday offers yet another perfect festival morning with sunny, not too warm weather. My first show for the day is mp3 blog hyped electropop dude Nordpolen. His show starts off with a sample of Swedish opera classic "O helga natt" that turns into a loop and builds up to the first song. The band mixes electronic pop harmonies with a steady beat and bare chested lead singer Pelle Hellström looks like a young Dave Gahan in his leopard jacket. A decent set, but it is only hit single "Skimret" that really stands out.

Göteborg rockers Franke enter the main stage wearing corpse paint and start off their set without uttering a word. As usual. Today, their angst powered reverb heavy brand of rock is lost in poor sound and distortion, perhaps by accident, perhaps on purpose. Their distaste for their audience is as apparent as ever. After 30 minutes singer Niklas Franke whispers "We are Franke" into the microphone, that is the only words they speak other than their barely audible lyrics throughout the whole set. The few older songs they play are great, but otherwise it is just remarkably dull. Old hits such as "Aldrig förstå" are sorely missed.

The closing act at the Meadow stage are electro pop duo Familjen. A massive crowd has gathered and after two seconds of the first song they all start dancing. The dancing continues throughout the set and then out through camp sites and to the out door dancefloor/stage Trädgården where Den Svenska Björnstammen and Adrian Lux keep the dancing going on all night or at least until I leave the premises for this year. Good night Emmaboda, see you next year.

Words and pictures by Kalle Landin