http://www.tenderversion.com/
Reviews: Yamon Yamon - This wilderlessness / Scraps of Tape - Grand letdown / September Malevolence - After this darkness, there's a next / Once We Were - Contra / Scraps of Tape - This is a copy is this a copy / Audrey - Visible forms / September Malevolence - Tomorrow we'll wonder where this generation gets its priorities from

No Favours = Victoria Skoglund (Audrey, Mire Kay) + Anna Jonsson (Kamikatze) and their friend Stefan Holmberg on bass. Look for their debut self-titled album to be released this fall via //.

Coming this September via .

The full tracklist and cover art for the upcoming Scraps of Tape album "Resident flux" has been revealed: http://scrapsoftape.wordpress.com/2011/10/06/370/
As mentioned before, the band will be doing a few dates in Germany (and at home) to support the release of the album, due out October 26 via .

Shapes & Layers is the name of a new band featuring Martin Lundmark (September Malevolence) and labelmate Per Tannergård (Once We Were): https://www.facebook.com/pages/Shapes-Layers/174384522608457
No samples online yet, but they say they will be releasing two albums this year.

Check out Solander's new single "The garden", the first from their forthcoming album "Passing Mt. Satu": http://tenderversion.com/wordpress/?p=586
"Passing Mt. Satu" will be released on May 11 in Scandinavia/May 20 in Europe via .

Done with their new EP that is, and it sounds great! The name of the new 5-track EP is "Fortress" and it will be released on April 1 via on CD, 10" vinyl and as a digital download. Expect public samples to go online soon.

has announced the signing of Mire Kay, the new duo formed from Emelie Molin and Victoria Skoglund of Audrey. Look for them to record their debut EP later this month with a release planned for March/April. Also in the works from TVR is a new full-length from Solander -- keep an eye out for that one to surface somewhere in the neighborhood of April/May. 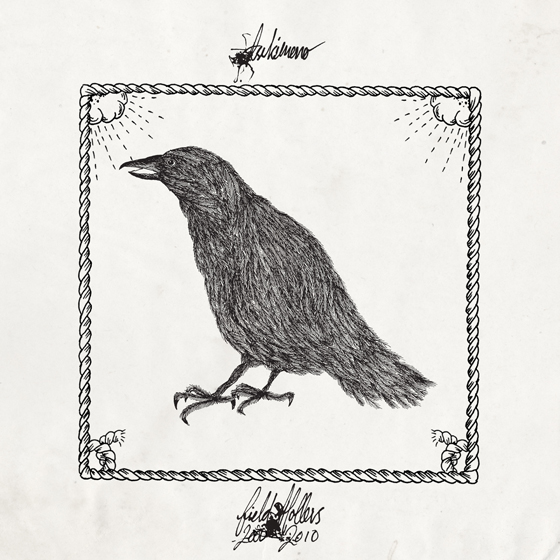 I had this idea; my idea was this collection.
This collection presents the music of Johan Gustavsson made under the Tsukimono moniker. It's meant to work as a "beginner's guide" as well as a testament to Tsukimono's first 10 years as an artist. I hope you enjoy this free-music as much as I have through the years, and I hope it can inspire you, as a listener, to delve deeper into the vast Tsukimono catalogue. There's a plethora of greatness to choose from and making selections for this compilation wasn't an easy task.

Wise men say only fools rush in. Some other wise man (still could've been Elvis though) has also said something to the effect of: Writing about music is like dancing about architecture; it's a very stupid thing to do. And regarding this album, letting the music speak for itself is surely the wisest thing to do.

Finally, just these words about Johan:
I've been close to a lot of people in my life, I've admired and loved quite a few, but Johan Gustavsson is the only man I've ever truly respected.

It's a Trap! is proud to present our latest netrelease: Tsukimono - "Field hollers 2000 - 2010" [IAT.MP3.015]
Curated, compiled and notated by David C Sjöberg, as quoted above, and featuring cover art by the artist himself, Mr. Johan Gustavsson.

I've known Johan for a number of years now and am ecstatic to continue my association with him, both as a friend and as a label. As with many artists in the experimental music scene, Tsukimono's discography is vast, varied and quite intimidating to the unindoctrinated outsider -- this collection serves as a much-welcome introduction to the man and his music. Organized thematically and not by release date, as you will read in David's superb and extensive liner notes, "Field hollers" aims to reduce the difficulty in approaching sometimes difficult music and succeeds beautifully. As much as I'd like to take credit for it, all must go to David and Johan for putting this collection together; I merely serve as the host. Much love to both of them and may we all enjoy the fruits of their labors.

Also! Johan will be releasing a new split 7" with Peter Broderick in October via , his first under the name Johan G Winther and also the first of the label's new "Re:Create Series" in which they will be recycling second-hand materials to construct the packaging of every release. As for the musical concept, both Peter and Johan decided to write a song about each other and then each covered each other's song, adding up to a grand total of four tracks. No exact release date yet, but it should be out in time for their upcoming tour together which kicks off in early October! Dates:

If this record had been released in the US, Yamon Yamon would be the perfect support band for the Cap'n Jazz reunion tour. However, while sonic similarities exist between those groups, it's from all of the Kinsella brothers' catalogue which influence is taken. It's quite a refreshing heritage too, not only because the music does not date itself as easily, but also because it's always been very competent. Yamon Yamon adhere to that aesthetic on their debut, creating a piece a bit more lighter and simultaneously punkier ("African nights") and one with indie-centric ferocity ("The darker place"). What has continuously struck me whilst listening to this though, is how great it must sound live.
- Matt Giordano

"Narcissus" is Solander's second video from the album "Since we are pigeons", out now via . Download the track along with a pair of exclusive b-sides here: http://solander.bandcamp.com/album/narcissus
Direct link for the video: http://vimeo.com/10540405

This band continues to evolve with every album and this, their third overall, finds them trying to incorporate more standard pop conventions into their particular brand of heavy postrock. There's still plenty of focus on long, interwoven guitar parts and complex arrangements, but there's also a lot more vocals than ever before and a renewed attempt at redefining and refining their sound. Bits of Fireside-esque post-hardcore gets intermingled with other, more contemporary post-indie/rock/whatever and the end result turns out to be a bit more schizophrenic and far less consistent than previous album "This is a copy is this a copy". However, at the same time, it's far more interesting to hear a band grow with each new release and that's certainly what SoT are doing and the tracks that do work well are easily their best material yet. For each misstep, such as two unnecessary and out of place cover tunes (A novelty slowcore version of Minor Threat's "Filler" plus "Eric" by the terminally underappreciated Carpet People), there is a stride forward. An inspired idea on paper, sure, and undoubtedly fun for the band to play, though not so hot in execution. I foresee "Grand letdown" as a transitional work, a bridge for things to come. It's worth noting too, that many of their peers are going through similar musical soul-searching (Aerial, Immanu El, etc.), all struggling to break free of expected genre trappings and all ending up in a slightly different place. So far, so good... let's see what happens next.
- Avi Roig

September Malevolence
After this darkness, there's a next
A Tenderversion Recording

Listening to "...accidents happen so fast", I can't help but wonder at how brilliant an Aerial and September Malevolence show would be. The two acts share a lot in common, but as both bands are within the post-rock genre, there's plenty of terrain to be explored without encroaching too terribly into another's territory. September Malevolence lean more towards an organic examination -- "A notion, I can't shake...", which sets the scene for "...accidents happen so fast", is almost entirely an acoustic number, lacking any of the post-rock beauty that explodes into being with "...accidents"; and "Brandskär" is a gorgeous piano interlude. The group also maintains a beautiful optimism throughout their work, much like Explosions in the Sky, not stumbling down darker, more melancholy avenues such as contemporaries Aerial and Mogwai. Even "I shut doors and windows", which feels like it might succumb to the shadows never quite allows itself to drown, teetering precariously on the edge at times, but never falling. "After this darkness, there's a next" is a gorgeous album, definitely already a contender for high placement in my Best of 2008 list.
- Lars Garvey Laing-Peterson

Once We Were
Contra
A Tenderversion Recording

You have a lot of choices these days when it comes to the sprawling genre oft labeled 'post-rock.' Recently Mogwai have released their soundtrack to "Zidane: A 21st century portrait" and Explosions in the Sky dropped their most recent and, in my opinion, best record not too long ago. In such a niche-genre, it can be very hard to be noticed amongst the well-established champions of these cinematic, atmospheric compositions; here, it seems, Once We Were will have no problems. Given the many overlapping dynamics explored by post-rockers, there is plenty on "Contra" that can be compared with other musicians, but lazy analysis like this would only divert attention from what Once We Were excel at: crafting mesmerizing, powerful songs, and stringing so many different musical expanses together into one tapestry. Soft analog keys exists next to concise piano notes, vocals slip into the mix alongside intricate guitar work, and Once We Were make it work, make it a fluid, continuous evolution. Like a sequence of seemingly disconnected moments, "Contra" strings these quilted moments together into a coagulated being, almost more concrete being composed of linked fragments than it would be composed only of similar materials.
- Lars Garvey Laing-Peterson

Oh, Scraps of Tape. The critical success of this album means that it is tempting to trash, but I am not going to be one to rain on their parade. Delicate, yet intricate notes, phrases and melodies bloom into a huge resonance of sound and beats. It is the beating of your heart that matches the rhythm of the guitars as it does its sway dance. They live by repetition and also the 'if it ain't broke, don't fix it' doctrine. The drums come in at the moment the song cries out for drums. But it's the hardness that explodes so suddenly and powerfully that distinguishes this post-rock band. The only stumble in this marathon is the underdeveloped lyrics at times forcing its way into the song prematurely or too late. This dizzy dance should never end, but when it does, you're satisfied.
- Jennifer Ma

What is it with Swedish bands and spectacular debut albums? Audrey's first proper full-length could very well be the defining indie record of the year. I can hear a range of influences varying from Cursive to "Gran turismo"-era Cardigans (minus the electronics) to Nick Drake and Spiritualized. However, Audrey entirely owns their sound. This is a band that has grown into their first album and realized their potential. Songs like "The significance of being overt," "Treacherous art" and "Views" are beautiful (actually, this whole album has left me stunned, as it is so melancholy, formal and beautiful). I tip my hat to them for creating this, and whomever is their booking agent - get this band to tour with Sigur Rós, they deserve it.
- Matt Giordano